Started racing when I reached 61 because it was something I had always wanted to have a go at but running one’s own business is very time consuming.  I would have preferred to have a go at racing motorcycles, but that met with a definite NO.

It all started with a trip to Oulton Park for the Gold Cup meeting. Kate and I were watching the historic sports car race and I commented that it must be great fun and would love to try my luck.  To my surprise, the next comment was”OK, if you get one of those” pointing to an XK120 Jag.  We looked for a suitable car but the budget would not get near the Jag level so I suggested an MG TC.  Put out a few feelers and came up with a car raced a few years previously and the driver had now retired from racing to seek silence and sunshine.

Car was duly purchased and then stripped to check it over, make it lighter (it was the heaviest T-type on the grid) and make it go and handle well. The body was already panelled in aluminium, so the doors were modified, the front bulkhead and front apron fabricated out of alloy as was the petrol tank. The car was lowered, fitted with panhard rods back and front and the front axle de-cambered and refitted the right way round. New tyres, a rebuilt 1350 engine running on 1.75 HS6 carbs and a rebuilt gearbox. The diff had to be rebuilt because there were a number of crown wheel teeth floating about in the bottom of the casing – but you would not have known without having a look inside. The back axle leaked oil onto the rear brakes, so a pair of specially treated halfshafts were purchased that had improved oil seals. New seat, new clocks and dash and of course new belts. The floor was made from aluminium sheet and the handbrake modified. A new coat of black paint completed the job (for now!).

The car was then one of the lightest on the grid and after being set up on a rolling road went fairly well.

As I enjoy developing the car within the regulations as much as driving it, I wanted to make it more competitive – after all my competitors had all been racing for a number of years so I had to think of ways of trying to minimise their advantage. For the next season the engine was bored to give a capacity of 1466cc, a large valve, ported alloy head and an alloy radiator installed.  I was getting slightly better and the car was going well.

Some of the T-types were invited to go and race at the Copenhagen Historic Grand Prix, so three of us entered and made our way at the beginning of August to Harwich for the ferry to Esjberg.  We had a good time and could not fault our hosts, the organisers, and made several new friends.  We were in the pre-1947 class and the car went well apart from the gearlever coming out in practice!  The Prince of Denmark, opposite us in the paddock, lent me some tools to fix it. Two second places in our races gave me 3rd overall on the podium.  However, I was impressed by the speed of the Danish T-types which were supercharged and luckily got the opportunity to buy a supercharger from a fellow Danish racer along with pulleys and the cam developed in the USA to go with it.  More development over the next winter ended up with a supercharged TC.  It went very well but for some reason had a tendency to throw or break drive belts reducing the performance to something less than a standard car. Over the last 3 seasons this “gremlin” has been worked on and we thought it had been sorted by high belt tensioners but unfortunately the belt disappeared half way round the last lap of the Snetterton 4 hour relay race having completed an hour of racing. A different belt system (using a PK belt and sprung tensioner, for the technically minded) has been put in place for this season. The team of 4 cars came 1st in class and 5th overall on handicap – a creditable effort by all team members. 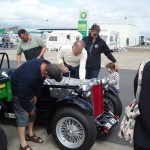 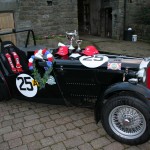 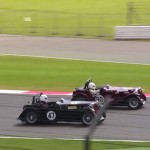 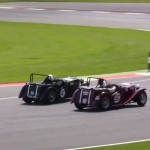 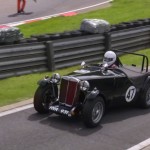 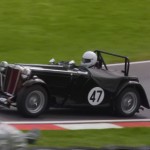 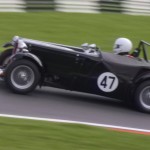 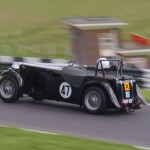 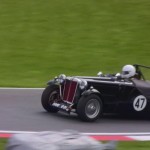 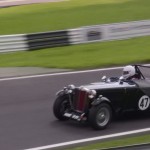 Last season I had one attempt at hillclimbing at Barbon Manor near Kirby Lonsdale. The problem this time was overheating whilst waiting in the start line queue. Half way up the second practice run the coolant boiled and the effect was like having a bucket of hot water throw in the face at probably 60mph. The time was still encouraging despite the shock, lifting off the throttle and worrying whether it would make it to the top. On inspection after, the top tank of the alloy radiator was round, blown out by the pressure when the overflow tube had somehow become blocked. A soft hammer and another mod needed to solve this problem. Luckily a new radiator was not needed.

This season the races for T-types are at Mallory Park on 29th March, Brands Hatch on 2nd and 3rd May, Silverstone on 20/21 June, Oulton Park on 12th September and the 4 hour relay at Snetterton on 11th October.

I also have an FIA MGB race car which I share with my son, James, which will be in the Equipe GTS series which has more races venues including Spa, but we have not yet finalised our calendar for this car.

Looking forward to Mallory and this will be the 2nd time I have raced there. A large class of T-types should make for a good racing.