Excellent turn out for the June evening social run, many thanks to Wayne and Carl for writing the route.

The July Natter hosted the Pride of Ownership, results as follows;

Congratulations Peter, well deserved and on your first visit to our Natter too!

North – Jeff Marsden This month we had a talk by David Naylor about the formation, rise and demise of Naylor Cars, based on the 1955 MG TF.  It was an interesting insight into the industry and MG Cars part in both the formation and subsequent curtailment of the business. Of the 160 cars made some were shipped to Japan and only one LHD was made for a customer in Germany. The number of units made was limited to the number of Q series drive trains that MG would sell to Naylors.

The Chair reminded members of the forthcoming events and the fact that we would have to find a new venue in January whilst the Tempest was being refurbished. Also, we needed to elect a new Chairperson, which may prove to be more difficult than alternative premises!

Vale of York – Rick Illingworth.  The July natter was once again held at lunchtime on the third Thursday at the Bay Horse ,  Goldsborough , and the new manager made us most welcome. Holidays and members other commitments reduced the attendance to 11.

Numbers are being taken for the Otley Extravaganza on 11th September and thoughts are being given to another short afternoon post Natter run in August.

A reasonable attendance for the July meeting which due to the good weather was held in the beer garden. Sadly, only one car so far from the West has committed to attending this year’s Compass Run, where has all the enthusiasm gone looking back to past years when the West natter organised Compass Runs to Benningborough Hall and the York Farming museum I’m doubting those days will ever return.

South – Mike Breedon.  July saw several South Natter members on holiday, but Norrie & Karen kindly prepared the 42 mile route that 14 members did to celebrate the 25th Compass Run on 31st July 2022. As usual on any South event it all started with a sandwich and a cuppa option at the Scawsby Mill Pub before heading to the finish at The Motorist, now a very popular venue to meet up and see all kinds of classic and modern cars. Fortunately, we had a new member join the Natter in July, Derek Cogill who with his wife as Navigator soon got into the swing of things when they entered their MG Midget for the Compass Run.. Preparation work continues for the Dales Run on 28th August so another busy month. 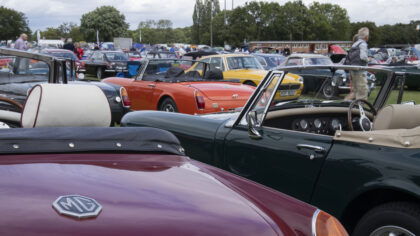